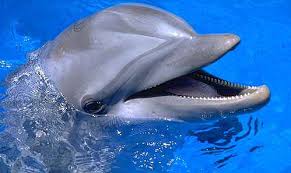 Natural births taken to new heights… or rather, new depths.

A North Carolina couple is raising awareness about a fringe parenting trend: giving birth in the ocean in the company of dolphins.

Expecting mom Heather Barrington, 27, and her husband Adam, 29, are on their way to the Big Island of Hawaii, where they plan to visit the Sirius Institute, which specializes in so-called dolphin midwifery.

Several weeks before Heather’s July due date, the couple will spend time swimming and building a connection with a pod of dolphins, and ideally the actual birth will occur in the ocean with the porpoises present.

“It is about reconnecting as humans with the dolphins so we can coexist in this world together and learn from one another,” Heather told the Charlotte Observer.

Birthing with dolphins might be unusual but it’s nothing new. The practice first gained attention in the 1970s due to a Russian midwife named Igor Tscharkofsy who helped women birth in the Black Sea with dolphins. The story goes that Tscharkofsy was conducting an underwater birth when three dolphins appeared, helping the mother cope with the pain of labor and opening up the door for dolphin midwifery, according to an article in an online alternative health magazine called Wake Up World. From then on, Tscharkofsy sought out pods of dolphins to assist expecting moms with birth.

News of the Barringtons attempting a dolphin-assisted birth in Hawaii has sparked some controversy.

Over at DiscoverMagazine.com, Christie Wilcox writes, “My professional opinion: this has to be, hands down, one of the worst natural birthing ideas anyone has ever had.

“Because of their friendly disposition and common occurance in aquariums, we tend to think of dolphins as trustworthy, loving creatures. But let’s get real for a minute here. Dolphins don’t eat sunshine and fart roses. They’re wild animals, and they are known to do some pretty terrible things.”

-Amy Graff, Expecting mom plans to give birth in ocean with pod of dolphins, SFGate

Dreaming of warmer days 🌞 . [Jia Lian cheesing and shrugging in front of gigantic lush taro and a pond in the San Francisco botanical gardens]
I'm not a Ruth Asawa sculpture but that won't stop me from trying to be one! 💞 . [Jia Lian posing silly like an Asawa inspired form followed by several looped wire form within a form and tied wire form sculptures suspended from the ceiling]
My annual lemon tree-trimming chore 🍋✂️😷 . Doing this over the years really taught me that I can do anything... but the lopper is rusted and blunt now and I have no upper body strength so I guess having the tools and training to do the job is really half the battle 🤣
Trying to bring this exuberance into 2020 😄⛲ . [Cheesing with Ruth Asawa's Aurora, a folded paper inspired public work set in a lovely fountain] . 📸: @aprication
It's okay to feel and feel deeply. It's okay to be wrong and adjust with new information and situations. It's not your job to make other people happy, but it is your work to notice what happens when certain triggers and stuck points are touched. When your mind is spinning, move your body. And speaking up about what you need and confronting problems honestly and head on is hardly ever as horrible as you think it will. . Have you been kind to yourself today? . ✋🏼 [Image description: hand grazing Spanish moss]
I wanted to let you know I'm choosing to thrive 🌱 . [Swipe for Jia Lian grinning thru Spanish moss, Harry and Sally being darlin, me and @aprication living our best nature lives in Santee] . 📸: @aprication for first two pics